In: Parent
With: 24 Comments 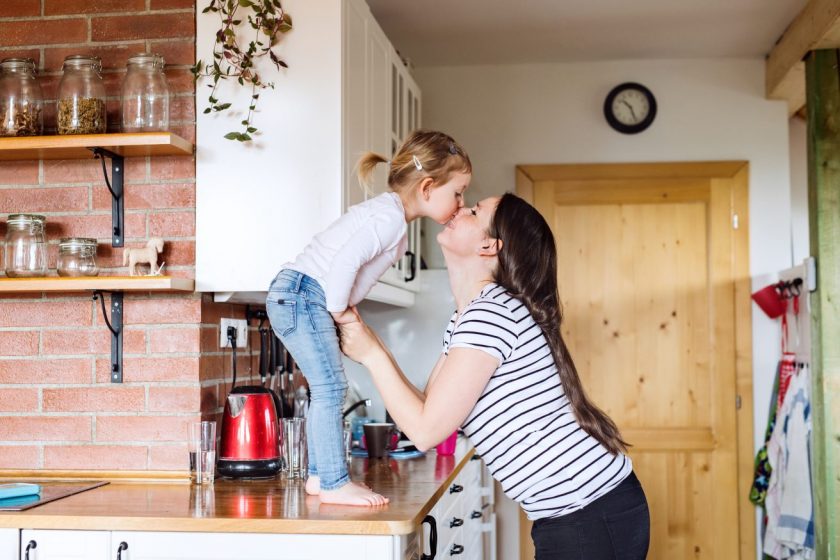 Inside: Should motherhood influence our choices and career paths as women? How should we counsel our daughters to think about their futures? Evolving thoughts from a millennial stay-at-home mom (later turned work-at-home mom) with significant student loan debt.

Update – Between my husband and I, we came out of college with over $90,000 in student loans. In 2021, I can finally say they are paid off. I now work from home part-time while homeschooling our five children, two of which are daughters. I have added new thoughts on this topic five years after this post was originally published.

As I watch that loan payment deduct from our bank account month after month, I sometimes question my choices. I wonder how I might have chosen differently had I known that I wanted to be a mom, and a stay at home, homeschooling mom at that.

You see, that wasn’t the plan.

In high school, when I was touring colleges and picking degrees, I wasn’t planning on getting married at 21 or having a baby at 23 or having four kids by now. If you have told me then that this is where I would be fifteen years later, I would have laughed in your face!

Motherhood was not even a thought. In fact, I shunned the idea altogether and imagined having kids later in life, maybe my late twenties.

And now I have a daughter.

Like so many other moms, I want to say to her, “What do you want to be when you grow up? You can do anything!” I see how absolutely awesome she is, her tremendous potential and so many possible career paths ahead.

But I hesitate, and that last part doesn’t leave my mouth because she’s a daughter…and I know what she might be one day.

Yes, she just might become a mom, and despite what our society tells us (you CAN have it all – career, motherhood, marriage, THE WORKS), moms everywhere know the truth: when you become a mom, it’s just not that easy.

Choices, so many really hard choices are thrown at you the second you see that little pink plus sign.

I am not saying that when you become a mom, you have to drop everything, scrap all your future career plans and stay home with your kids.

I know that path isn’t for everyone, and I also know (and am so thankful) that there are a million and a half ways to do motherhood in our modern world. I’m currently navigating my own mix of work at home, stay at home mom life right now.

What I am saying is, what if our daughters become moms, and they want to stay home with their kids?

What if they realize that in their heart of hearts, that’s what they want to do? What does that mean, and should it change the way they plan their lives, even from the time they are teenagers?

The Complexity of Motherhood

No one prepares us for the complexity of motherhood, for all those crazy feelings you feel when you hold your first baby in your arms. Even the women with the most resolute plans to return to work in six weeks are caught of guard by that moment. Some of those women toss those work plans right out the window at their first glimpse of their precious babies.

Other moms start out rocking the whole working mom thing, only to have life throw them a curve ball.

Remember the episode of Parenthood where high-powered lawyer Julia Braverman walks away from a very successful career because balancing that career with the intensity of motherhood and adoption was just too dang hard?

She just wanted to be home with her kids, to stop missing everything, to stop splitting her focus in so many directions. (And yes, I know that didn’t work out too well for her, but that’s a whole other conversation.)

Whatever anyone else says or wants us to believe, motherhood changes everything.

It splits your focus in a thousand different directions.

You can balance work and motherhood, but it can feel like walking a tightrope…and the whole balance part? It doesn’t really feel like balance at all – more like crazy pendulum swinging back and forth from one extreme to the next.

Does it mean degrees are worthless if you decide to stay home or change your career path because of motherhood?

Does it mean that everything you have worked for is wasted?

Does it mean you will never get to do what you love to do, what you believe you are made for?

No, but it does mean you’ll have limits, ones you didn’t have before you became a mom.

There are little people depending on you, after all, little people you love so fiercely, you don’t know how your heart doesn’t burst just thinking about them. Those little people need you, and because they need you, there will be less of you to go around for a while.

And that changes everything.

It might mean your dreams get put on hold.

It might mean those dreams are fulfilled in a completely different way than you originally pictured.

It might mean you learn to juggle a whole lot of stuff in order to do it all.

We’re moms: we know this.

But Marriage and Children Are Not Guaranteed

I have dear friends in their thirties with no obvious marriage prospects, as much as they desire to have a family. If they had planned their entire lives around motherhood, they would probably be more than a little bitter right now.

I also have a good friend who married young, but her journey to motherhood was filled with pricks and pokes and tests, and tears – so many tears, as she fought the hard battle of infertility. Her badge of motherhood was hard won and by no means was it a sure thing.

So what then, should we ask our daughters as they approach adulthood?

What do we ask when motherhood is a possibility, but not an absolute certainty?

The Question We Need to Ask

My only proposition here is that we talk about the concept of motherhood and that it changes things…get the idea out there. I mean, biologically speaking, as women, we are made with the potential to be moms, so it only makes sense to discuss it as a possibility.

I’ve heard so many women wish their parents had asked them this question, women with numerous regrets.

They would have avoided college debt.

They would have thought just a little bit more about that random liberal arts degree they’re still paying for month after month.

They would have chosen a different career.

They would have figured out how to work from home a lot sooner.

But even asking such a question as a woman in today’s world feels like we’re moving backward almost, working against what women have been trying to achieve for centuries.

And we’re afraid – afraid that by even asking at all, we will hold our daughters back from reaching their full potential, from doing all that they are capable of. We risk them choosing a different path based on the thought of something that might never actually come to pass.

Of course, asking the question doesn’t necessarily mean their plans will change. Our daughters are young after all, and they are perfectly entitled to make their own mistakes and walk their own road.

But what would you have done differently, if someone had asked you? Maybe you’ll ask, maybe you’ll start that conversation, and their plans will change. And maybe that’s a good thing.

Going to college with a clear purpose (not because it’s the thing to do)? Good thing.

Choosing a career with motherhood in mind? Possibly a good thing.

Educating themselves about work from home options? Good thing.

I don’t know the timing of it all, and I honestly have no idea how such a conversation will go. But kind of like talking about the birds and the bees, none of us parents really know what we’re doing anyways (if you do, please tell me your secrets!). We don’t always know exactly what to say or how to say it.

But that doesn’t mean we don’t have the conversation.

We need to try.

We need to open the door to conversation, to a connection that will hopefully strengthen our relationship with our sweet daughters, so it can endure the ups and downs of growing up and becoming the women they are meant to be.

Even though it opens up a whole can of worms, let’s be brave, mamas. Let’s go there with our daughters.

They need to know about the joys and the complexities of motherhood.

Maybe asking won’t change anything, but they at least deserve to be asked.

I wish someone would have asked me this question…do you?

Special thanks to Chrystal Evans Hurst, who inspired this post when on a recent episode of the Inspired to Action podcast, she mentioned the need to ask our daughters this question.

Now with five kids, juggling motherhood and work hasn’t gotten any easier. There are days I feel like I am losing my mind, and I can’t do it anymore.

Sometimes I long for the simpler days of “just” being a stay-at-home mom without needing to juggle work along with everything else (…except I was battling with stay-at-home mom depression during those years).

But on those days, I go to sleep at night, wake up the next day and remind myself that I am thankful very for this work.

I don’t necessarily regret my early days as a stay at home mom. I needed that time to get my feet under me, to figure out how to adjust to motherhood.

Now? This work is a part of me. It’s a part of me that will live on as my kids grow and after they leave. It’s me reclaiming my identity apart from motherhood.

I am also very thankful for the income it provides, and the potential for it to grow to a full-time income should I ever be in a position to need it.

The book The Feminine Mistake – Are We Giving Up Too Much? heavily influenced my perspective shift on this topic. The biggest idea in this book is: you never know what life with throw at you, and as a woman, it’s critical to be prepared for the unexpected.

Am I still encouraging my daughter – and all of my kids, for that matter – to avoid student debt? Absolutely.

Will I encourage her to think about the future with motherhood in mind? Yes…and no.

But who knows. Five years from now, you might ask me what I think about this post. And I might change my mind again. And I’m ok with that.

If you never change your mind, why have one?

2017-09-12
Previous Post: Why Homeschool? The Most Compelling Reasons to Give It a Chance
Next Post: The Easiest Way to Introduce Woodworking to Kids