In: Blog Income Reports, Blogging, Work At Home
With: 5 Comments

This site contains affiliate links to products. We may receive a commission for purchases made through these links. Please read my disclosure for more info.

Inside: My final blog income and traffic report! Read how I reached my goal of $1,000 a month income from this blog, and where I will go from here.

June and July were not very productive blogging months for me, as I was in the middle of my first trimester. I thought the first trimester was bad when I was pregnant with my first baby at 23. Nope! It’s so much more exhausting at 32 with four kids to take care of besides. I did the very bare minimum with blogging for two months in order to keep everything moving in the right direction.

When I first found out I was pregnant with my fifth baby, I thought it was going to be the death of my blog, of all the hard work I’d poured into it over the past year and a half. On the other side of my first trimester – when my motivation is lower than zero – I now see it very differently.

This pregnancy is the best thing that could have ever happened to my blog.

Why was it the best thing that could have happened? It forced me to seriously evaluate my blogging tasks for their R.O.I. (return on investment). Where was I putting in effort that was basically wasted, for myself and my readers?

Before I got pregnant, I was spending time (and money) trying to build a Facebook following. I was seriously considering hiring a VA in order to take over Facebook and other unimportant tasks.

I had to decide what to cut and where to focus my efforts in order to make the most of my limited time. You can read on to “What I’m Changing” to see what made the cut. 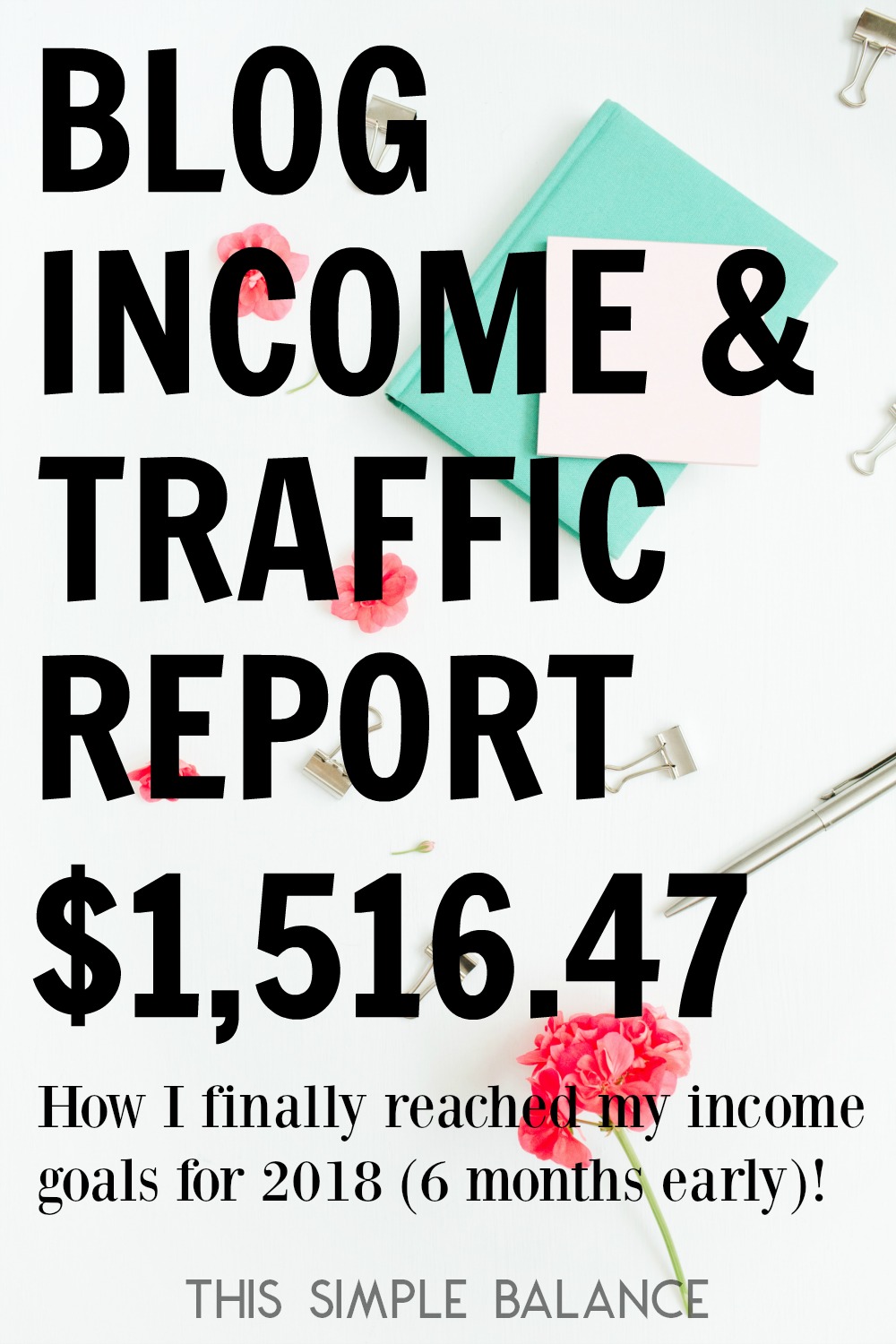 Search engine traffic continued to increase in June, even though overall, my pageviews are down significantly (pretty much halved) from their March, viral post high. My ad income reflects those March pageviews – close to 100,000 that month!

If you’re curious, I still made a good amount of ad income from my smaller pageviews. My September ad earnings will be around $650 from this number, though you need to remember that ad income varies by season.

My Most Popular Posts

Unsurprisingly, my top posts are the same as May’s, just in a different order. It is 100% true that a handful of posts drive the majority of your traffic, at least from Pinterest. I’ve had a difficult time replicating the success of these posts, though I am less focused on creating viral posts now. Perhaps a post will replace these one day, but likely not anytime soon.

What Worked This Month

This month, there is not much to report about what worked except that I had a number of unexpected affiliate sales from posts that started to get traffic from Google. In addition, one particular pin decided to go viral on Pinterest sometime in June, and it hasn’t stopped since then. It still receives 15-30 repins a day, which has helped my account, I’m sure.

Pinterest made so many changes in June. I changed my Pinterest strategy accordingly by reducing the frequency of my pinning to group boards. I made several new, personal niche boards and increased my pinning to my own boards. I have seen definite improvement to my numbers over July and August as a result of this strategy.

Pinterest is also putting an emphasis on new content – new posts and new pins. I am still working to make my scheduling pins less arduous. I spent a lot of June making new pins for old posts, but I will probably stop doing this as frequently and will instead change the descriptions of old pins when I schedule them in order to partially satisfy Pinterest’s desire for “new content”.

In addition, I am making 2-3 pins per new post and staggering them to schedule throughout the week. 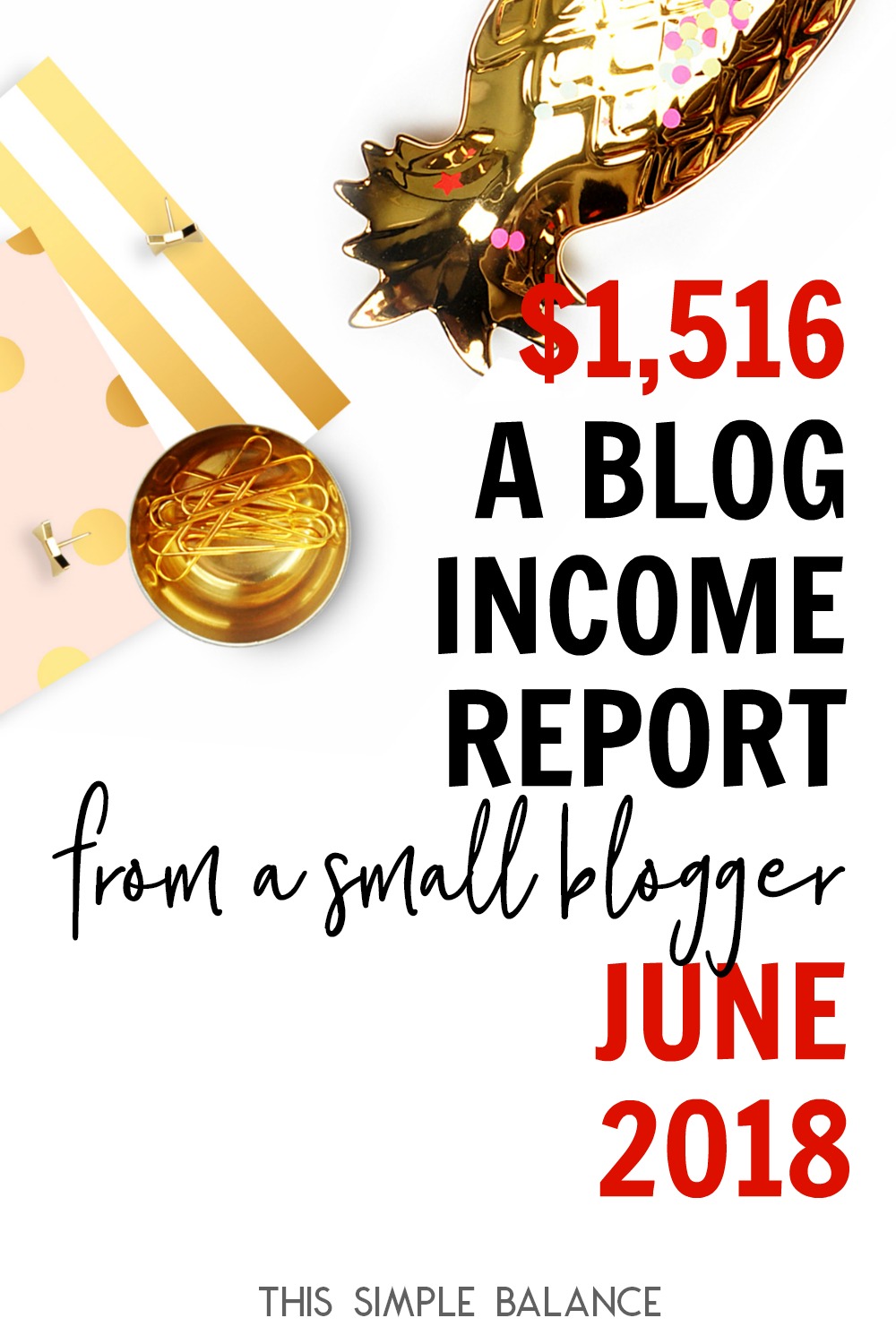 I need to remind myself that I never thought I was reach this goal, that I almost gave up at the end of last year. When I think about earning $2,000 a month, that feels impossible. But when I read my old income reports, I know it’s possible!

Again, this is income I received this month, not income I “earned” this month, which will be paid out in 1-3 months from the time I earn it. It’s also important to note that with certain affiliate sales, like Amazon, if someone makes a return, I lose that commission.

That is another reason why it’s important to read income reports carefully to understand how that particular blogger reports income: earned or received.

So…I was planning to switch hosting in June. Unfortunately, I waited until the last minute to cancel my Siteground hosting. Tightwad that I am, I wanted to get the most out of what I paid for.

Of course, they offered me a discount, which made staying with them comparable to switching to Lyrical. That plus first trimester fatigue, and I opted to stay with Siteground for now. I have learned my lesson and will switch next year or mid-year to Lyrical, depending on how my second site does with traffic in the next few months.

Note: I realized that on previous blog income reports, I was incorrectly reporting Converkit’s fees as $29.99, when it fact, I pay $29 a month.

Remember when I said earlier that I was reevaluating how I spend my work time and looked for things to cut? Well, Facebook was the first thing to go. I haven’t gotten as extreme as a fellow blogger who deleted her business page altogether. I just don’t give my Facebook page the time of day most of the time. I will post 2-3 times a week at most.

Why did I ditch Facebook? First, I was spending $20 a month on a scheduler to keep it going, and it definitely wasn’t paying me back $20 a month. Second, I myself often find Facebook a waste of time. I try to spend less time on it as a busy, homeschooling, work at home mom, so why would I be encouraging my followers to spend more time on what I consider a waste of time?

When I thought about it that way, the decision was easy: bye-bye Facebook.

Blog posts I write on a whim that are purely emotional or encouraging without any research into whether people (my audience or people using search engines) are actually looking for the information I am providing? Also, gone. In very rare cases, I will make an exception. The vast majority of my posts are now well-researched and have a clear monetization and promotion plan (Pinterest or SEO) from the beginning.

I sat down and evaluated my e-mail list. How could I best help the people who take the time to sign up for my list, while also making it worth my time? Since I pay a significant amount every month for my e-mail list, I also need to justify the expense.

I made an action plan of three e-mails a month containing quality content (with no affiliate links, only links to blog posts, old and new), followed by one e-mail sequence a month to let them know about a product I use and love.

I will finally be implementing Rosemarie Groner’s Core Affiliate Marketing Strategy. We’ll see how it goes!

My current focus is increasing my affiliate income to match my current ad income. I want to be less reliant on increasing my pageviews to increase my income. That also means making sure all of my posts are solution-oriented, and that people would head to a search engine to find the answer.

Pinterest pageviews are nice for the ad income and for random Amazon affiliate purchases. Search engine pageviews offer higher ad revenue and more conversions for the products you recommend. I am currently take the Beta version of a new course by Lena Gott of What Mommy Does called “Money-Making Blog Posts”*. I really want to up my game in my posts themselves, again to make the best use of my time.

*This particular course by Lena isn’t available yet, but in the meantime, you can download her free Blog Traffic Bonus Guide.

The good thing about being a minimalist is the few products I use and love and truly ones I use, love, and rave about. The bad thing is that I don’t have as many products to promote as other bloggers. I want to make the most of the small number of products I can promote.

Moving forward, I will be working towards launching my second blog by the end of September. I would like to have ten posts up before I start promoting it on Pinterest. Juggling the two blogs will be interesting, but pregnancy blogs have so much potential to become substantial earners quickly, I need to get it up and running and on Mediavine Ads before I have this baby!

Well, that’s it: my last income report, at least for now. I started writing income reports to track my progress towards my goal of $1,000 a month, and what a crazy ride it has been!

If I could give any encouragement to new bloggers (especially mom bloggers) it would be these two things:

Comparison is the most deadly trap for bloggers. We look to our left and to our right and see bloggers with three month old blogs earning five times what we are, and we wonder what we are doing wrong.

When you compare numbers, you never see the whole picture.

You don’t know how many hours that blogger works a week, whether they got lucky and hit a popular topic on Pinterest at the right time on Pinterest, whether or not they have kids or their spouse helps around the house so they can work more.

Keep your head down, do the work, learn all you can from people who know what they’re talking about, and you’ll make progress. It might not be progress to the tune of thousands of dollars a month. It might just be increasing your income by a hundred dollars a month.

Know your goals (which might not be a full-time income like someone else) and focus on those. Define your own success; don’t hold yourself to someone else’s definition of success.

You can do this! I’m rooting for you.

Come join us at Mom Bloggers on a Mission. I hope to see you there.

Read Next: Affordable Blogging Courses for Beginners on a Tight Budget

We use cookies to ensure that we give you the best experience on This Simple Balance. You can switch off these cookies easily if you wish. Follow the read more link for more information.OkRead more