The Right Way to Deal with Decluttering Guilt

In: Declutter
With: 3 Comments 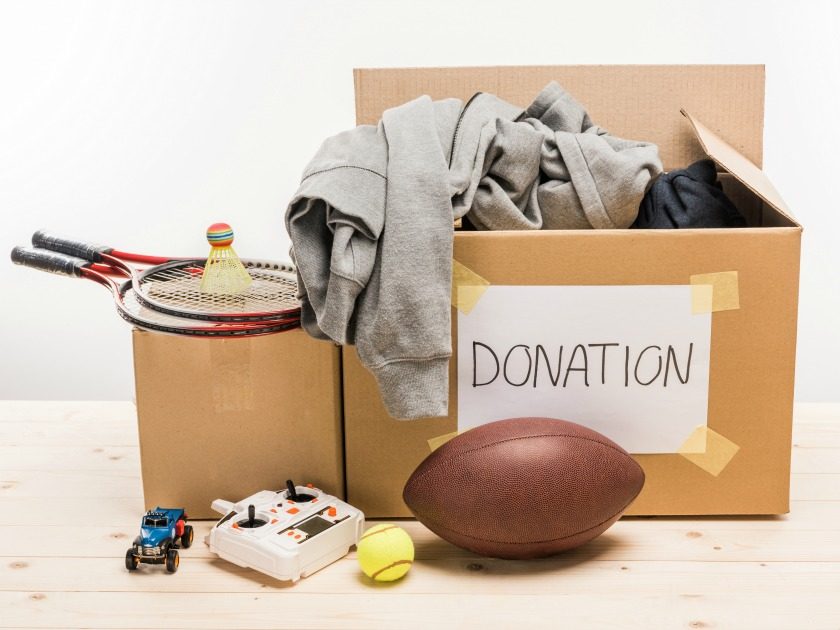 Inside: There is a dark side to decluttering, and that dark side can lead to a serious case of decluttering guilt. But how you decide to deal with that guilt? It has the potential to change your life (and the world) far more than decluttering ever could.

Marie Kondo is revolutionizing the western world…again. Thanks to her new show on Netflix, it seems like every other photo on my Facebook and Instagram feed is of freshly decluttered spaces and before and after photos.

Oh yes. And all the bags of unwanted stuff.

Trunks full of them, probably bound for the local thrift store.

Yesterday, I came across this article, and this quote struck me to the core:

85% of clothing that is donated to second-hand stores ends up in landfills every year. -Emily Cline

Having just dropped off yet another load to the thrift store a few days ago, a large majority of the donations being clothes, I was more than a little convicted.

When I shared that same quote with my readers, the response was a mix of similar conviction, but also of frustration.

And I absolutely understand where that frustration is coming from!

In one breath, I seem to be telling you to ruthlessly declutter. In the next, I’m making me feel guilty for decluttering.

Frustration is a reasonable response. But underneath either response – frustration and conviction – is decluttering guilt.

So, what should we do with decluttering guilt?

Stop decluttering? Keep all our stuff? What, then?

If you’ve been a reader long, you know that’s not my answer.

Instead, here are two valid and productive responses to consider.

How to Respond to Decluttering Guilt

1. Declutter as responsibly as possible.

If you hang onto that clutter too long, it very well may make its way back into all the corners of your home, especially if you have little kids! And the last thing you want after going through the hard work of decluttering is to reclutter your home just as quickly.

But consider this: all that clutter we need to get rid of? It’s mostly our own faults.

Yep, I said it, and it stings more than a little bit. Keep in mind, I’m talking to myself, too.

Aside from (possibly unwanted) gifts for other people, most of this is on us:

We were poor consumers.

And confronting our careless buying habits is anything but fun. It’s downright uncomfortable.

Dropping our unwanted clutter off at our local thrift store? It’s an easy fix, a soothing balm for to our guilt.

One man’s trash is another man’s treasure, right?

One man’s trash might end up being the world’s trash, trash it will be dealing with for the next hundred years.

You have seen WALL-E, right?

(This is a fresh revelation for me, too, by the way.)

85% of the clothing that is donated to secondhand stores ends up in landfills every year.

You read the statistic: 85% of our cast-off clothing donated to thrift stores goes unwanted by anyone. Who knows what percentage of our other donations goes to the landfill, too?

So instead of making the quick drop-off your go-to method for getting rid of your stuff, take the time, as much as you can, to get it directly into the right hands, instead.

Make your best effort to find the man (or woman) who will “treasure your trash”.

Here are a few ideas, although I’m certainly no expert:

Will we still end up bringing things to the thrift stores? Of course. Do they still need donations? Yes, they do.

But we can make it one of a few different places we bring our unwanted things, not the only place.

All of these actions demonstrate true effort to get your items into the hands of people who will actually consider them useful and/or beautiful. These actions take responsibility our irresponsible buying habits of the past, instead of letting the earth bear the brunt of our mistakes.

Which brings me to the second thing we can do to deal with decluttering guilt.

The question, “Is minimalism really for everyone?” has been on my mind a lot lately.

For me, becoming a minimalist is mostly about living an intentional life, and that means being very intentional with what we allow into our homes (and our schedules, and more).

While I haven’t come up with a good answer to my question, what I do believe is for everyone – especially after reading about how much of our stuff ends up in the trash – is to be better consumers.

There. I said it.

As I watched Marie Kondo’s new show, the foremost question on my mind was, “Will these families simply declutter? Or will they change their buying habits from here on out?”

Because if you only declutter, and never change your buying habits, you’ll only end up right back where you started.

Changing your buying habits means you are intentional with your purchases. You make an effort to buy the thing that will actually last, instead of the cheap stuff that is everywhere we turn these days.

Does that mean you need to be wealthy to be a minimalist? Because quality things that last cost a lot more money?

In fact, I still shake my head every time I hear a popular minimalist state yet again that minimalism “frees up your money to spend more on higher quality items.” That’s simply not the case for everyone.

(See The Downside to Minimalism (that no one likes to talk about) for more on that topic.)

For example, I still believe that IKEA Ektorp couches are a great investment. It’s easy to replace the slipcovers down the road if they get extremely worn from kids or pets (which is going to happen with your Pottery barn furniture OR your IKEA furniture).

You can also find Ektorp furniture second-hand relatively easily. You can get a new slipcover directly from IKEA, from eBay, or also on Facebook Marketplace, thus saving at least the furniture from the landfill, if not the slipcover, and getting a bargain at the same time.

Another personal example is rain boots. I know that Hunter rain boots are all the rage, but $150 is WELL out of my price range and to be honest, I’m not even convinced they are worth that price.

I found Crocs rain boots to be a great alternative: they come in super fun colors, are well-made, and last a long time. Crocs frequently offers sales, too. They are a fraction of the price of Hunters and still a quality investment.

Call yourself a minimalist or don’t. Seriously, the label doesn’t really matter.

But DO make the commitment to consume differently from now on.

Guilt is never a fun emotion, but it can be a worthwhile one IF we let it change our behavior in the future.

While I’m not Marie Kondo’s biggest fan, even though I started decluttering because of her, I am thankful that her show Tidying Up is bringing decluttering back into the spotlight in a big way.

I don’t know how many people have Netflix (the vast majority of Americans, I’m sure!), but I believe that this show is reaching far more people than her book ever could. Video is far easier to consume than her book, and who doesn’t secretly love reality television shows?

Decluttering changed my life: I want that for everyone.

As we declutter, let’s change how we buy stuff.

If we don’t, we’re asking for yet another helping of decluttering guilt in the not so distant future.

Read Next: 8 Tips for Decluttering on a Low Income (from a mom who’s been there)