In: Book Lists, Homeschool
With: 0 Comments 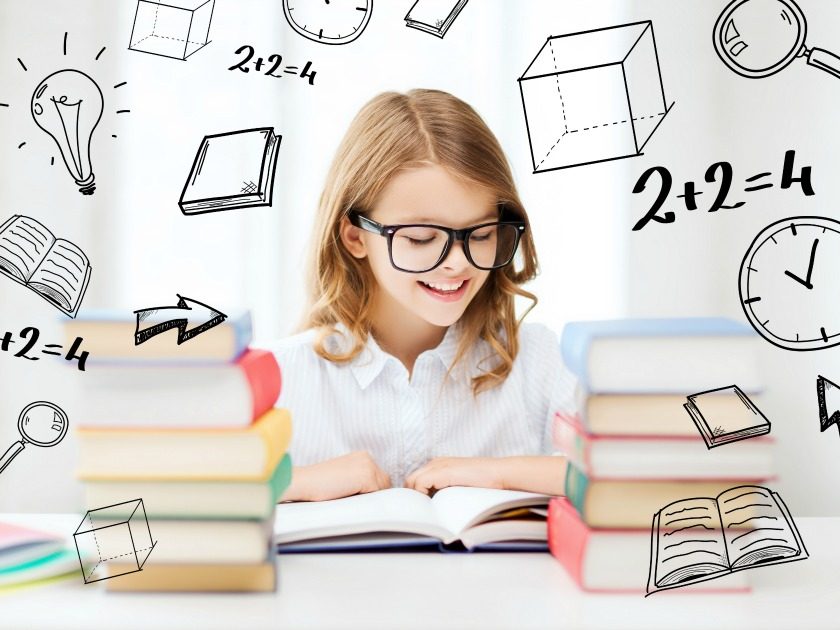 Inside: Math books for kids are perfect for teaching math concepts in elementary school. Children will not only understand the real-world applications of math, but they will also have a greater likelihood to develop math confidence.

Math is the subject that most homeschool parents are scared to teach, even during the elementary years. Every other subject doesn’t seem that difficult. Well, except for grammar: I mean, how important is it really that kids know what a past present participle is?

All of these changes leave parents unsure of their ability to do even the most basic elementary math, let alone help their kids with math. The way math curriculum requires you to do math problems is no longer straight-forward or the way we were taught twenty-five years ago. I once attempted to tutor a second grader in math, and I literally had to teach myself every math lesson because the way the curriculum approached math problems was so foreign to me (yes – second grade math!).

“Why would they change math?! Math is math!” Mr. Incredible (Incredibles 2)

Math Books for Kids: Why Use Them to Teach Math

What makes teaching math more complicated is that even when children have the intellect and natural ability to excel in math, math confidence more often determines whether they succeed or fail. If an extremely bright student decides he is “bad at math”, he is far more likely to struggle, until that mindset is altered.

Because math has become more complicated in traditional education, and because I want to build math confidence in my kids, I constantly return to narrative style math. Teaching math with picture books gives them a strong math foundation during their elementary years.

Math picture books assure both me and my kids that math really isn’t that difficult.  In fact, math is all around us – woven into our everyday lives, and it can even be fun!

3 Reasons You Should Use Picture Books to Teach Math

1. Children understand how math is connected to everyday life and other subjects.

I am a strong advocate of using picture books to teach just about every subject during the elementary school years. Textbooks and encyclopedias definitely have their place (like when I want to explain why you see lightening before you hear thunder), but picture books put concepts in real-world context.

2. Children understand that math has incredible value, and they can learn with purpose.

I am very intentional about what I include in our homeschool curriculum. I want my kids’ learning to have purpose, and I want them to know what that purpose is. I do my best to talk out loud to them when I use math in our day to day life.

Math in the context of story reinforces the idea that math is both useful and necessary. We really can’t be successful in life without math, at least the basics covered by most elementary math curriculums.

Math books can easily be used to teach every elementary math concept, from addition to estimation to fractions.

Facts are much easier to remember when we learned in the context of story. For example, Jenny Found a Penny teaches coin shapes, sizes, and values. The story follows Jenny, who is trying to save up enough money to buy her own piggy bank. As she finds various coins, children learn what each coin is worth, complete with pictures of the coins. Later on, they should be able to more easily visualize the coin and the value associated with it.

Even now, a month after reading the book, when I asked my daughter if the book talked about more than just pennies, she said, “Oh yes, it taught us about all kinds of coins, even a half-dollar.” Picture books give them a “hook” to hang the math fact on, so to speak.

Related: Life of Fred Math Review – Reasons It May or May Not Be For You

1. The Boy Who Loved Math

This book not only introduces math concepts, but it also details the life of brilliant mathematician Paul Erdos. Author Deborah Heiligman shows how a passion for math can develop at a very young age and eventually become a career. [Math Concept: Math as a Career]

2. Fractions in Disguise: A Math Adventure

George Cornelius Factor must hunt down a missing fraction, which is probably stolen by known villain Dr. Brok. He invents a fraction reducer in order to find the fraction in disguise. [Math Concept: Fractions]

It turns out Cinderella has a twin sister! They share everything equally: the housework, the sewing, and the step-sister meanness. But they can’t share the one and only prince. [Math Concept: Fractions]

4. How Many Guinea Pigs Can Fit on a Plane?

Ridiculous questions can actually be solved with math. From how many guinea pigs can fit on a plane to how many soccer balls would fit inside a hollow earth, this book demonstrates the power of math to answer any question (even the ridiculous ones). [Math Concept: A Little Bit of Everything]

Pauline and John-John want to have a lemonade stand…in winter. But they’re not just selling lemonade: they’re selling limeade and lemon-limeade, too. A simple money math book set in an amusing story that kids will love. [Math Concept: Money]

6. On a Beam of Light: A Story of Albert Einstein

Follow Albert Einstein from childhood to adulthood. Discover how this genius mathematician used his imagination to birth his many of his most brilliant mathematical theories and discoveries. [Math Concept: Math as a Career]

Monkey friends are baking a cake, and they need the amounts in their recipe to be correct if the cupcakes are going to turn out. They learn about the critical importance of place value: 261 is NOT the same as 621. [Math Concept: Place Value]

A triangle is bored of being a triangle, so he seeks out a shape-shifter who transforms him into a quadrilateral. Never satisfied, the unhappy triangle continues to add angles, changing his shape with each new addition. [Math Concept: Shapes]

9. The Berenstain Bears Trouble with Money

Brother and Sister Bear need to learn where money comes from. They start business after business and watch their savings grow, but they still need to learn the most important lesson: that money isn’t everything. [Math Concept: Money]

10. Sir Cumference and All the King’s Tens

Sir Cumference and Lady Di have planned a surprise birthday party. However, there are too many guests! They need to learn how to counts by tens, hundreds, and thousands to determine how much food and drinks they will need for lunch, let alone the rest of the evening. [Math Concept: Place Value]

12. Full House: An Invitation to Fractions

The Strawberry Inn fills up quickly, until every room is taken. In the middle of the night, all the guests are hungry, and Miss Bloom needs to figure out how to divide one cake equally so everyone gets a slice. [Math Concept: Fractions]

13. If I Were a Quadrilateral (Math Fun)

How many different shapes are quadrilaterals? Find out all the entertaining objects you can make with quadrilaterals, from kites to checkerboards. [Math Concept: Shapes]

Learn about every facet of time: from second and minutes to years and decades. This book is a great way to introduce and reinforce units of time! [Math Concept: Time]

Animal friends of various sizes want to play tug-of-war but are stumped about how to make the teams fair. They try a few different ways to solve the problem before they realize that their weights can be added and divided to figure out how to form equal teams. [Math Concepts: Addition, Division]

Another fun book that helps kids understand large numbers, A Million Dots answers the question, “What does a million really look like?” Visualize exactly what one million looks like – in dots. [Math Concept: Counting]

How do you top pizzas when everyone wants something different? You need to carefully count the toppings and know how to divide pizzas into fractions to evenly place the ingredients. Learn fun facts about pizza along the way! [Math Concept: Counting, Fractions]

The county fair is the perfect place to learn all about fractions, decimals, and percents. With pies to eat, arcade games to play, and toys to buy, readers will see the value of math, even when you’re having fun. [Math Concept: Fractions, Decimals, & Percents]

22. Spaghetti and Meatballs for All

The Comforts are having a dinner party with spaghetti and meatballs on the menu. They carefully craft a seating plan for their 32 guests, only to have those guests come with different ideas about where they should sit. [Math Concept: Area & Perimeter]

One crocodile is determined to catch five mischievous monkeys. Over the course of the day, hour by hour, he tries again and again to outwit them, but those monkeys are just too clever. [Math Concept: Time]

When Flora decides to add a thirteenth bean to their pile, she and Paul’s real problems begin. Why? Because thirteen is NOT divisible by two, or three, or any number at all! [Math Concept: Division]

Eight racers start the race, but how many will actually finish? They face multiple challenges that divide the competition over and over again. Who will cross the finish line (if anyone)? [Math Concept: Division]

What is time, anyways? How do we know how many hours are in a day, and minutes in an hour? How did tracking time start, and how did people decide how to measure it? Follow the history of time, from way before sundials to the present. [Math Concept: Time]

Follow the rabbits month after month and learn the clever and hilarious ways Fibonacci’s problem can be applied to rabbits. [Math Concept: Sequences]

The King wants to reward a very wise man. Refusing to accept the offered reward, he suggests an alternative deal, instead. The tricky deal involves grains of rice, chessboard squares, and doubling numbers every single day. [Math Concept: Exponential Growth]

Jenny wants to buy a piggy bank, but she needs every coin she can find. With an unexpected ending (where kids learn the truth about tax), this story will keep kids wondering if Jenny will ever reach her savings goal. [Math Concept: Money]

30. It’s Not Easy Being Number Three

What would happen if one of the numbers decided NOT to do his job anymore? The Number Three decides to find out. When he walks away from his job as Number Three, he eventually realizes how important he really is. [Math Concept: Counting]

What children’s math books would you add to this list?

2019-02-14
Previous Post: Valentine’s Day: Handmade Cards for Kids
Next Post: A Busy Mom’s Guide to Working From Home with Kids