I Tried to Shop My Way Out of Postpartum Depression

In: Declutter
With: 2 Comments 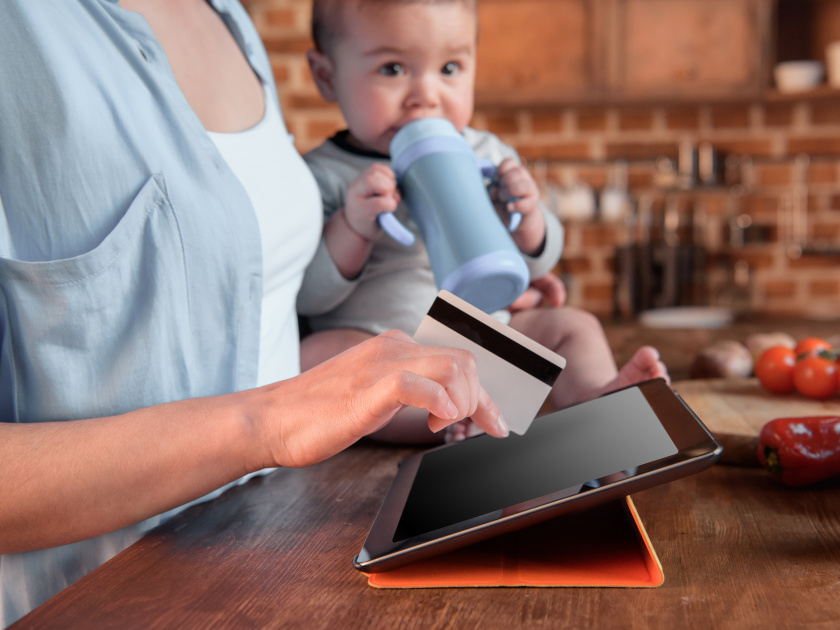 Inside: I tried to use shopping to medicate my postpartum depression. As a minimalist, the results didn’t shock me. They only confirmed what I’d known to be true all along.

Our fifth baby came into the world two days early, and with her, a fair share of challenges in the weeks and months that followed.

Impossibly long hours for my husband as he worked full-time AND studied weekends for three months straight to prepare for his professional engineering exam.

Trying to juggle homeschooling and a new (difficult) baby and working from home, but without the support system I’d had after every other baby.

All I had was this unsettling, underlying feeling that something was wrong.

But with a newborn, four more kids home all day, plus work, I didn’t have a whole lot of time to dig deeper.

Before I Turned to Shopping

First, I tried to work my way out of it.

I gave myself a pep talk and started a second blog and made several adjustments to this one. I tried to work harder and longer hours, but the baby wasn’t having it.

Next, I tried to set crazy big goals like living wicked frugally and paying off all our student loans.

While we did manage to pay off several thousand dollars, doing so nearly drained the life out of me. Every big payment and loan paid off was exhilarating. But I felt like I was running a marathon with no finish line.

When the exhilaration of debt pay-off stopped helping, I finally realized just how severe my postpartum depression was.

I didn’t want to do any of the things I normally did, and I felt like I was running out of options.

I Knew Shopping Was a Bad Idea, But…

As a minimalist, I knew in my head it wouldn’t help, at least not long-term.

In fact, I’d just finished reading a book called Playing with F.I.R.E. earlier that summer about the financial independence movement. In the book, they ask you to do this exercise on happiness, to make a list of the top ten things that truly make you happy.

You can probably guess that physical stuff isn’t in most people’s top five, right?

So even though I knew better, I was so depleted emotionally that I started making excuses.

I told myself that we deserved the stuff I bought since we’d lived so frugally for so many years. We had extra money now, and it was close to what I’d be spending on therapy anyway…

So I let my guard down, my generally unwavering self-control that never let me say yes to anything for myself.

I gave myself permission to try Stitch Fix for the first time (something I swore I’d never do), get Starbucks whenever I wanted, shop the Target endcaps, buy things for the house, homeschool resources.

If I wanted something, I didn’t hesitate.

Related: 40+ Gifts for Minimalist Moms That Won’t Cause Anxiety

Shopping Helps For a While, Until You Need More

And at first, shopping helped.

I was happier. Those boxes showing up on my doorstep put a smile on my face.

I got that fresh kick of dopamine with every single “buy now” click on the Amazon app, and every box I opened.

But you know what’s coming, right? It didn’t last.

The initial dopamine effects wore off, and it took more and more boxes, higher and higher levels of spending to get the same level of elation.

I’d drive up to Starbucks for the twentieth time, order anything I wanted. It was a little luxury I’d previously denied myself. But it no longer made a dent.

It was my new normal, and it no longer satisfied.

I tried other things – books for the kids, Birkenstocks I’d wanted forever, but never let myself have.

It wasn’t until that second, unexpected Stitch Fix box (that I forgot to cancel) showed up on my doorstep that I realized I might have a shopping problem.

As fate would have it, my Stitch Fix stylist was awesome and I loved almost everything. The pieces I wasn’t quite sure about were cheaper to keep than to send back, so I kept them.

It was my birthday. I deserved it…right?

That’s when the guilt started to creep in.

The weight of the extra bills.

The feeling that I’d gone just a tad bit overboard trying to shop my way happy.

While most of the things I bought over the past six months do “spark joy”, shopping didn’t really give me the relief I sought.

You know what it did give us?

Thankfully, my frugal roots run deep. So I didn’t go as overboard as I could have. I didn’t put us into debt, thank God.

But I still told myself that I deserved a little happiness in the midst of all the heaviness.

When “I Deserve This” Became “I Need This”

Then one day, I woke up to the fact that the message I told myself in my head had shifted. Instead of “I deserve this,” it became, “I NEED this.”

And the minute I realized I had replaced “deserve” with “need”, a chill went down my spine. That’s when I knew I had a shopping addiction, however mild in comparison to others it may seem.

I knew I needed to pull out my copy of The Year of Less and start rereading. I needed to remind myself what I already knew.

I knew I needed a no-spend challenge of some kind, something to break the cycle.

This shopping addition had all started with saying yes over and over again to seemingly harmless Starbucks, so I started there.

I gave up Starbucks this month.

I’m not gonna lie. The “I need this” pull is so very strong.

On the horrible, terrible, no good very bad days of motherhood, I’m usually ready to throw in the towel and head to Starbucks for that latte I “deserve”.

But thankfully, I’d publicly told people that I was taking January off from Starbucks. Accountability is powerful, y’all.

That strong pull wears off after an hour or so, but it comes back just as strong with the next emotional low. Breaking bad habits is hard work (which is why someone wrote this book about building good ones).

Since I’m taking break from shopping, I’ve turned to other things to try to help my postpartum depression.

Going for a drive.

And I’ve realized all over again that the things that really truly do make me happy, that bring just a little bit of relief from the lows? They cost hardly anything. They’re almost free, actually.

It might help for a little while. But it won’t bring you the long-term relief you’re seeking. It’s not going to fix those deep wounds.

In fact, all that shopping will just give you one more mess to clean up later.

So when you feel the urge to open up the Amazon app again?

Lace up your shoes, and go for a walk, instead.

Pick up the phone and call an old friend.

Watch a movie that makes you laugh so hard, you cry.

Get in the car, and just go for a drive. Don’t go TO somewhere – especially not to the mall and definitely not to Target. Just drive.

Declutter that room you’ve been wanting to actually use, but you can’t because it’s so full of stuff you can’t stand to be in it.

Those things may not help right away, but you sure as heck won’t regret them later like you will that crazy high credit card bill.

My shopping binge-fest this year confirmed what I’ve known to be true all along:

More stuff is never the answer.

Have you ever struggled with a shopping addiction? How did you break the habit?

Read Next: How to Stop Shopping: 10 Steps to Finally Break the Habit